Charles Moore of the firm of that name was his son and established later together with James Woodward the firm Moore & Woodward.

F rom 1818 to 1853 William Moore lived at Colchester Road, Edgeware, London. In 1820 he established his own business at that address, but by 1828 his trade had increased to the point where he required larger premises so he opened a new shop at 78 Edgeware Road.

In 1829 he also opened a stock making business at Court, 4 Whittall Street, Birmingham. This was also a purchasing office and finishing workshop.

In 1835 a percussion lock developed by Moore was rejected by the Board of Ordnance.

In 1838 William Moore and William Harris became partners in the firm of Moore & Harris, also at 35 Loveday Street, William Harris also traded from these premises in his own name (it is likely that William Harris was related to Alfred Harris who traded as a gun barrel maker in Birmingham).

In 1836 William Moore was appointed Gunmaker-in-Ordinary to King William IV, and in that year the name of the firm changed to William Moore & Co.

In 1854 the firm were appointed gunmakers to Prince Albert, the Prince Consort.

I n 1838 William Moore and William Harris became partners in the firm of Moore & Harris, also at 35 Loveday Street, William Harris also traded from these premises in his own name (it is likely that William Harris was related to Alfred Harris who traded as a gun barrel maker in Birmingham).

From 1840 to 1845 William Moore also traded in his own name as a gunsmith from 35 Loveday Street (the terms "gunsmith" and "gun maker" were interchangeable at that time), Harris also ceased trading in his own name in 1845.

In 1847 William Moore and William Parker Grey, who had been Clerk and then Manager for Joseph Manton, went into partnership in London at 78 Edgeware Road, they operated as Wm Moore & Grey but Wm Moore also continued to trade as Wm Moore & Co, presumably in respect of one or two aspects of his business.

In 1852 William Moore and William Harris patented a percussion revolver which was produced in limited quantities (Patent No. 69).

By 1859 in Birmingham, Moore & Harris had expanded into barrel and lock making and in 1861 they moved to the Great Western Gun Works at 91 Constitution Hill.

In 1861 Frederick Beesley was apprenticed at the age of 15 to William Grey at William Moore & Co at 43 Old Bond Street. In 1879, the prolific inventor and gunmaker established his own company.

In 1862 the partnership of William Moore and William Harris exhibited military and sporting guns at the International Exhibition in London.

Between 1862 and 1865 the firm advertised the fact that guns not made by them were being engraved with the name Wm Moore & Co, London. Guns of minor quality were produced in Belgium and sold as counterfeit products.

In 1864, after the death of William Moore, the business at the Great Western Gun Works at 91 Constitution Hill was sold at auction; the buyers were a partnership composed of "Moore and Harris" and a Mr Westley Richards.

T he new partnership closed within a year and the business was sold to W & C Scott & Son who valued the firm's USA export market. The firm of Moore & Harris, now owned by William Harris, moved to London, they were known to have been trading in 1867 from 2 Long Acre, London. When they ceased trading is not known, but it may have been prior to 1870 or even up to 1877.

In 1866 Henry Atkin moved from Purdey’s to work for William Moore & Grey, he founded his own business in 1877.

In 1867 Frederick Hargrave Grey, who by this time had taken over from his father William Parker Grey, patented internal strikers on hammer guns (No. 2743).

In 1893, when the Inanimate Bird Shooting Association was formed, a "Mr Harris of Moore & Grey" attended. He ran the Wealdstone Gun Club which was based at Harrow.

In 1908 Cogswell & Harrison took over the firm, and Robert Grey joined them. This was when the Aldershot branch closed.

In 1917 Cogswell & Harrison moved the company to their own premises at 226 Strand and William Moore & Grey ceased temporarily to trade under their own name.

In 1928 Robert Grey died, also in that year Cogswell & Harrison left the Strand and operated only from 168 Piccadilly. They later included a "Moorgrey" model in their range of guns.

The second World War reduced naturally the interest in high class luxury guns and most of the London gunmakers suffered from the economic downturn.

Many of the approximately 5000 traditional guns produced over the past are still perfectly functioning and part of the gunrooms of sophisticated clients, Royalty and Aristocracy literally all over the world. William Moore & Grey disposes of a considerable collection of shotguns, pistols, revolvers, express rifles but also patents and documents underlining the important history of this outstanding gunmakers.

Today, our guns made to the specific requests of our clients represent our experience and passion for the profession.

William Moore & Grey is fully aware of its legacy and history and still produces shotguns and rifles to the highest standards in accordance with the ambition of producing outstanding guns. 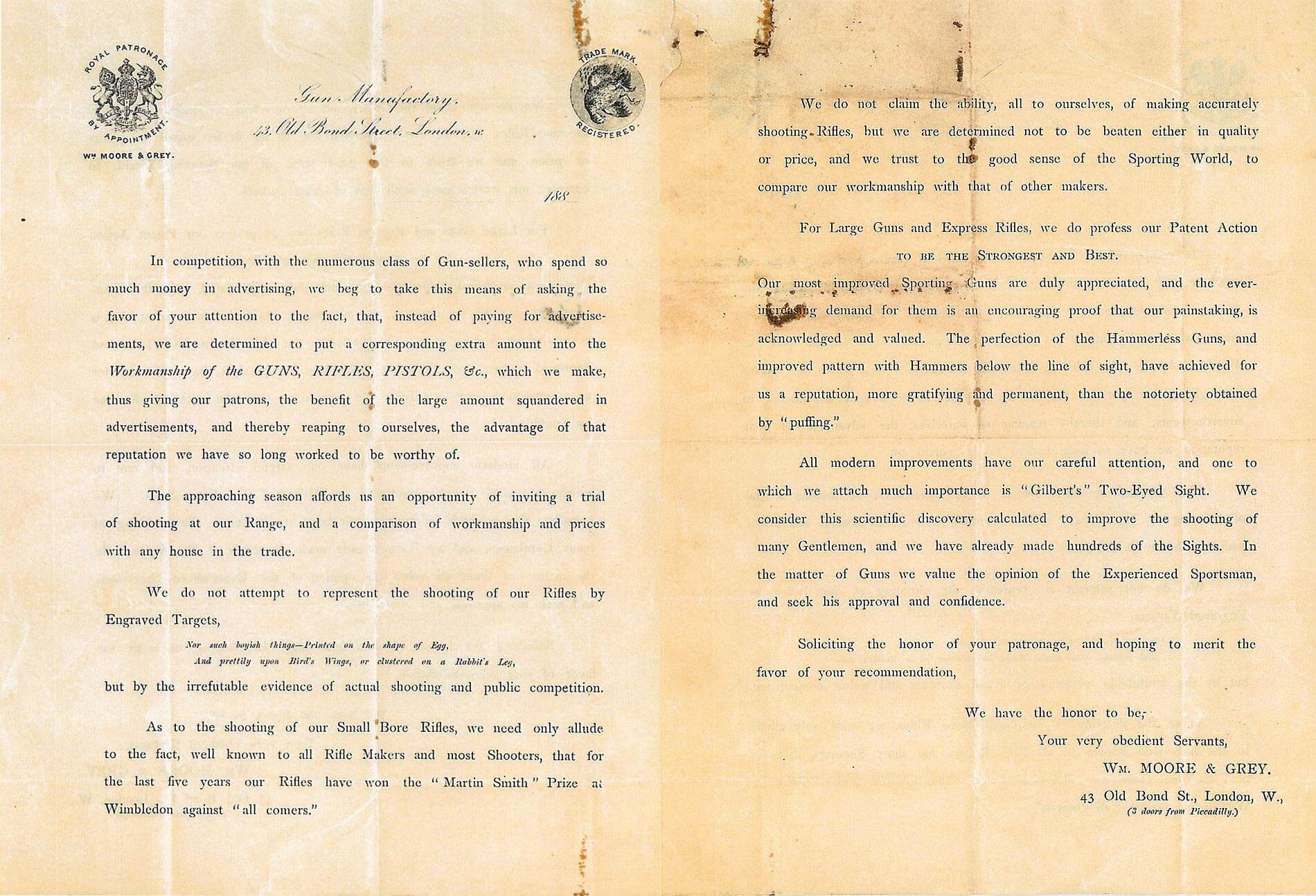 Valuations and Certificates of Authenticity

Owners of all William Moore, William Moore & Grey and Moore & Harris guns are welcome to apply for “Certificates of Authenticity”.

The applicant will be advised, and a certificate is issued for an administration fee of £160.-.

Valuations and appraisals of our guns can be made and require a more detailed consultation.

We use cookies to ensure that we give you the best experience on our website. If you continue ti use this site we will assume that you are happy with it.OKMore information